Going on a road trip with two kids of the same age (AKA twins) is so tiring.  We lucked out that Okra and Bunny had minimal tantrums on our last road trip.  We got brave and planned another one last weekend.  It was only about a two-hour drive to the California State Railroad Museum, one of Bob’s favorite places on earth.  He had wanted to show the kids all the huge locomotives in this train museum for quite some time.  Our original trip last November got canceled because of bad air quality.  We finally made the trip this time, which to me is better timing in terms of the kids’ understanding of things around them.  Plus Okra is a confirmed train enthusiast like his dad so it was even more exciting for me to plan the trip in order to wow him.  The goal to impress the kids was a mission accomplished.  Okra and Bunny’s faces lit up when they approached the huge locomotives.  Okra was especially excited; he kept on pointing at all the trains and making choo-choo sounds.  He ran around non-stop touching different trains.  The kids had so much fun up at the Thomas play area that meltdowns were almost guaranteed every single time.  We also rode first class on the excursion train ride.  The kids really loved standing at the window looking outside. 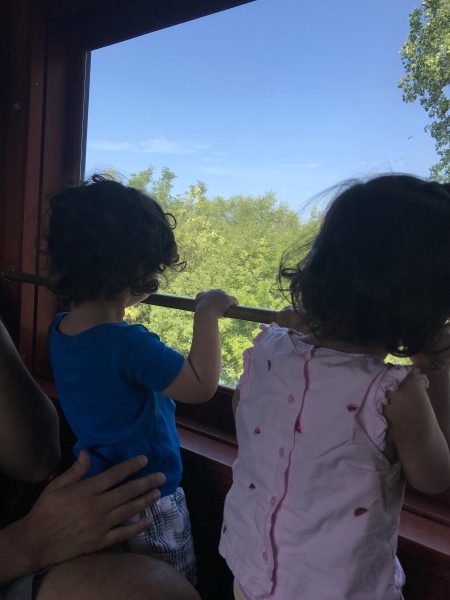 In terms of building memories, this was a fantastic trip.  However, other moments were not as enjoyable as the previous road trip because the kids have grown older and somehow have become whinier and more demanding.  Maybe because they are approaching two?  So many demands but not enough language.  Tantrums came more easily and longer for each toddler.  And when there are two of them, it just felt like it was never-ending.  It was like the end of a battle after we put the kids down for the night.  The only thing one would want was a good night sleep.  Both kids had had no problems sleeping through the night for months even during our last road trip only a couple of months ago.  This time Okra woke up in the middle of the night wailing two nights in a row.  The first night we had to get him so that he didn’t wake up Bunny.  The second night he did it again and both of them woke up crying.  So we had two kids in bed with us.  Needless to say, both Bob and I were extra tired and cranky the next day.  And when the kids didn’t sleep well the night before, they threw tantrums more easily the next day.  It is just a vicious cycle.  Bunny had an unusually huge meltdown when we were about to depart that we had to change plans and skip out on my dear friend Jane Allen’s little girl’s birthday.  I was so bummed to have to miss it but the kids wouldn’t be pleasant to be around anyways.  I truly do not mind the extra work that is required with all the logistics that comes with a trip, but the tantrums and meltdowns with twin toddlers are emotionally and physically (holding them down while they arch their back fighting being held) exhausting.  We have bought plane tickets for a four-week trip to Asia this coming Fall.  I shudder to think about being away from home for so long not having our routines and the tantrums these then-two-year-olds will have.  I know the key is to set no/low expectations but still.  I really have to mentally and emotionally prepare myself for such a long trip so far away with the effects of time zone changes and other changes on the kids.  BUT, this train museum trip was worth it despite the difficulties, and hopefully I will feel the same way about the international trip.

Follow In Quest of a Binky Moongee on WordPress.com

Much Ado About Nothing

filling the silence in the motherhood discussion

us vs balanced translocation
The MD & Me
OurGreatestDesire

Our journey with Infertility

Hopelessly Infertile and Surrounded by Fertiles

My Path to Mommyhood

Diary of a stubborn 39 year old who refuses to be infertile forever...

unexplained infertility, miscarriage, and my journey through IVF

This is a place for me to document my experiences

A Fight Against Primary and Secondary Infertility

A Chick and Eggs

My eggs didn't work, so I manifested a baby via egg donation. Let's blog and see what happens.

From infertility struggles to parenthood, and everything in between

Drinking all the cups of coffee. Sharing all the drops of bliss. Creator of a cozy home & mama village.

Chronicling My Path to Becoming a Choice Mom

My experience of recurrent miscarriage, reproductive immunology and other infertility stuff

Expecting the Unexpected
Infertile Girl in a Fertile World

Donor eggs to mommy-hood and everything in between

Thoughts on life, infertility, and parenting

to expand our fur family to include a tiny human

Hopeless idealism and [mis]adventures in longing, loss and love

Baby, Are you Coming?

A personal journey in trying for our first baby

The highs and lows of a child psychologist dealing with infertility.

It's Going to Take a Village

My rollercoaster ride to maternal bliss!

The Odds are Never in My Favor

My hilariously depressing journey with infertility

My Life As A Case Study

A journey through infertility & into motherhood